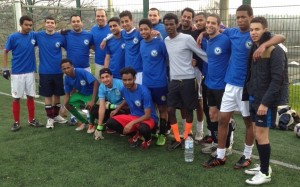 CONAFA – an 8-a-side tournament with 9 Churches entering teams from across the country. As it was the first ever CONAFA, we didn’t know what to expect which left us to rely only on legends told of the other teams. When the results of the group draws came through, I have to say my heart sank. Our team, a team that had never actually played together before, were up against the likes of St. Mark’s London, St. Anthony’s Rotherham, Eritrean Orthodox Nottingham and St. Mary & Archangel Michael’s Golders Green. We knew it would definitely be an uphill challenge, but we also knew we had all the right skill, muscle and team spirit to make it.

In this hope, we drew against St. Anthony’s Rotherham 1-1 (one of this year’s favourites). However, although we certainly played well, we somehow managed to concede 2 goals to Golders Green, only managing to put 1 in the net, giving us the first loss of the day. We also had a tough encounter with the Eritrean Orthodox Nottingham team who were awarded a penalty, leaving the result 1-0. Our final fixture was with a St. Mark’s London side who’s CONAFA campaign was so far a success. In the first half we were already 1 goal down but in the second half we managed to equalise and secure a draw.

Despite drawing against the two teams in our group who went through to the semi-finals, it was losses against Golders Green and the Eritrean Orthodox Nottingham teams that meant we were out of the tournament. Although it wasn’t quite what we were hoping for, we all had a great time and we felt the presence of the Lord with us as we prayed before each match, asking that we may glorify and praise His name, whether we won or lost. Bring on CONAFA 2015, Birmingham will be back!